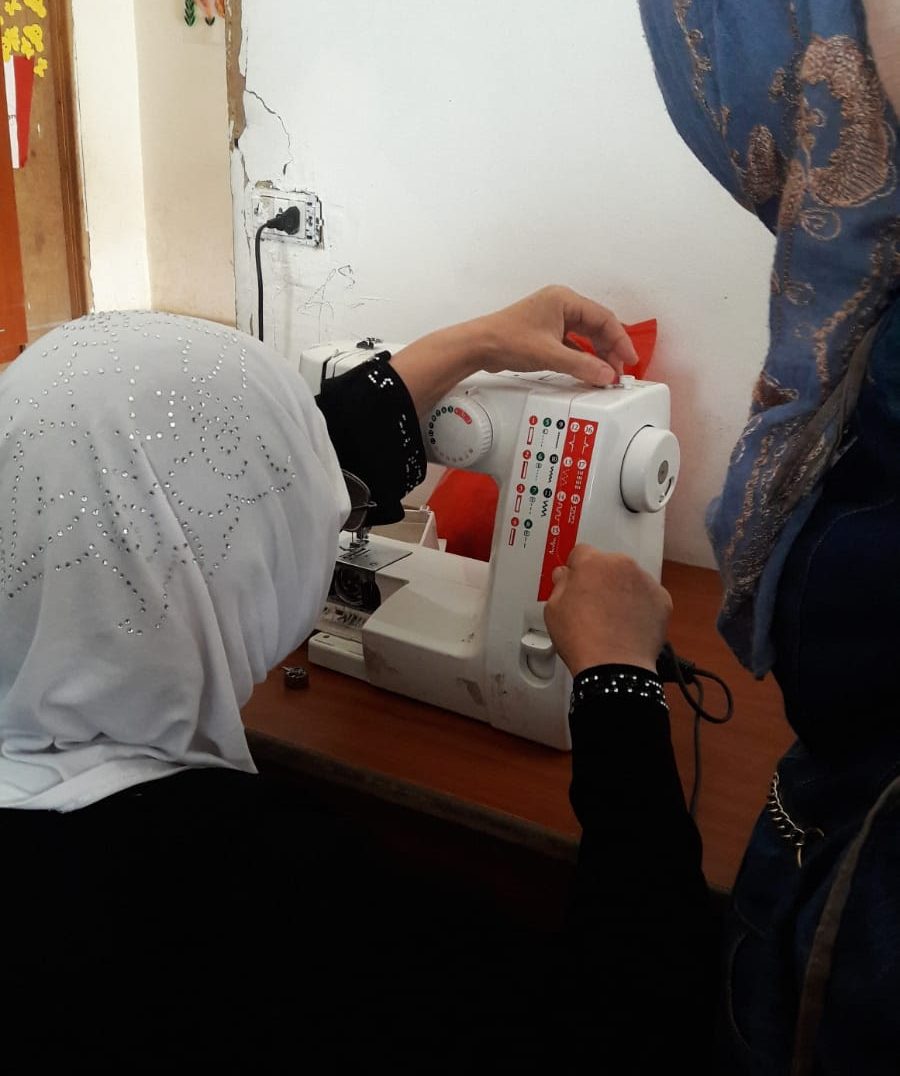 A kind-faced woman, modestly clothed in a dress and hijab, sat next to me. Surrounded by the hum of student chatter from the classrooms nearby, we smiled and greeted each other in the psychologist’s office at the SB Overseas School in Saida, Lebanon. I asked if I could write a story about her. She agreed and we got to know each other, at first laughing about my clumsy Arabic, as I struggled through some basic introductions; and then, with the help of the resident psychologist as translator, we spoke about many things.

The woman’s hands moved in her lap, opening and gesturing, now and then raising with her voice, as she recounted the last few years of her life. In this safe space she told me her name and her story. I am humbled to share some of what she told me here.

Inas*, a woman from Syria.

She spoke mostly in Arabic, though she was happy to introduce herself to me in English.

“How did you learn English?” I asked her.

“Here, in school,” she replied, and in Arabic, “شوي شوي” [Shway, shway] she laughed, meaning ‘A little’.

In Syria they had no problems, she said. Before war and conflict came to their home, she had lived happily in Damascus with her family, six daughters and two sons. She had worked in a clothes shop and her husband had been a taxi driver. When it became unsafe for them there, they left everything and fled to Lebanon.

They moved from place to place. At one point they moved to a farm in the south of Lebanon. Inas sighed. She said she had worked hard, but the farm owner had wanted her young daughters to work too.

“I wanted my daughters to go to school,” Inas said.

“We were from the city; they didn’t know how to work on a farm,” she explained. The family left and came to live near the Ouzai Syrian refugee shelter in Saida.

It was a painful time for Inas and her family. Her husband did not trust anyone and saw danger everywhere, so he did not want Inas or their children to go out. Inas did not even know that she was living right next to a community of Syrian refugees.

For the first time during our talk, Inas’ hands fell and her voice held a deep sadness.

“There was nothing. Only problems. I did nothing. I had no friends to talk to, nowhere to go.”

She spoke of how time keeps moving on. She felt exhausted and lost, knowing she was getting older, but at the same time she felt dead.

I was struck by her calm strength and honesty.

“What did you do next – how did you come to be here today?” I asked.

Eventually, her husband came to know members of the Ouzai community and learned about the staff at SB Overseas who had just opened the school at the shelter in December 2016. In January of 2017, Inas began taking part in the women’s empowerment program. She went to sewing and crochet groups, and English classes.

“I felt alive again when I came to school,” she said.

She told me the names of past volunteers who were her teachers. When she came to school, she discovered a safe place where she was treated like a real student and got to meet other women and make many friends. When her children started going to school, they would teach her English too. At home, around the dinner table, they would go through the alphabet and practice words like ‘bread’, ‘tomatoes’, ‘water’, and ‘rice’. Sometimes her children would say in English that they needed to go to the bathroom, and on social media she could understand some of the new digital world her children were growing up in: A world so far from her own childhood. Inas laughed and said how learning together has brought the whole family together, including her husband, who is less stressed, and proud that his wife and children are learning new skills.

“My husband studied French in Syria. He likes languages, so he is proud of me for learning English with our children.”

Inas explained that she arrived with nothing and hoped for nothing. Now she is optimistic about the future—“I have skills now. I can read advertisements and road signs. I can read medicine labels and look on the internet to find the names of medicine for my children. Sometimes I work as a seamstress. I like to make dresses and pajamas. I will have opportunities when I return to Syria.”

“Do you think you will go back to Syria one day?” I asked.

“Syria is my country. I love Syria.”

Inas smiled and spoke about her love for Syria, but also her hopes for her children. She said that she wanted to return to live in Syria. As for her children, she hopes that they will continue with their education, and wherever they find themselves, she will be happy and proud of them.

“An uneducated person is blind, they can’t see or notice anything around them. Education opens eyes.”

Written by Sophia Louise
*Name has been changed