The University of Life 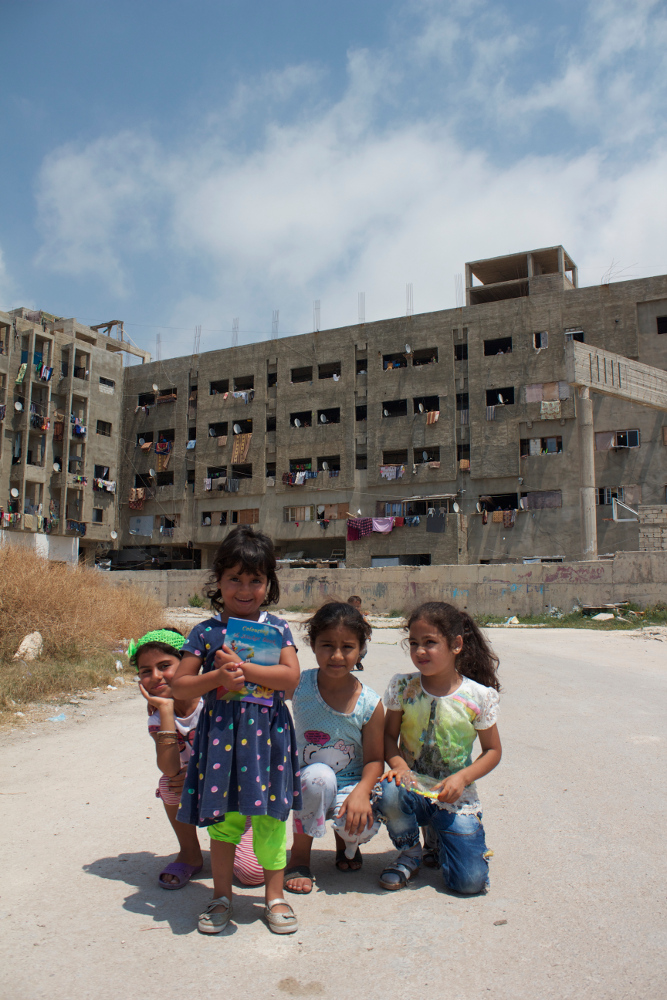 The University of Life

The bus from Beirut follows the coastal road south all the way to the town of Saida. If you are looking for the Ouzai refugee settlement you need only get off the bus when the seaside shops and restaurants appear, and turn around. To the left of a hospital’s glossy facades you will see a huge, bare concrete building. Before construction was halted on this site, the original intention was for this giant structure to become a university campus, a place of learning. With the university project abandoned, the children living in the settlement receive a gruelling education at a local public school, a bitter irony alleviated only by the ‘SB OverSeas Learning and Empowerment Centre No. 2′. Clothes and rugs hang on washing lines, which is to say that the building is obviously in use, but it looks coarse and foreboding, with dark holes where its windows should be. The effect is something like the eeriness of an old monochrome man with empty eye sockets, or a mouth with no teeth.

You can walk straight towards it over a wasteland of overgrown ditches littered with rubbish, but the closer you get the more your initial impression of a lifeless, haunted place is dispelled. Women watch you from above, and a hundred or more children are all throwing things, doing handstands, kicking the tyres of cars and hoofing a football around the forecourt. There’s a mosque adjoined to the property that would look utterly abandoned from a mile away but, again, standing next to it you can look through the gaps in the stone at the men praying. Its dome bristles with rebar like Tommy the rugrat’s head, and the single coveted football often lands in a pond of stagnant water next to the wall, followed by a little boy or girl wading gingerly after it.

There are about four hundred children in the settlement and I spent a couple of days messing around with some of them, watching their frustration, wild energy and resourcefulness. With the girls I played cards. They played very seriously, placing miniature, dog-eared cards in piles on the stone benches, slapping downwards with slightly cupped hands and, like little croupiers, gathering up the cards that flipped over. Their style of play was efficient and they only smiled when I brought my hand crashing down on the pile, failing to flip a single card.

With the boys I arm-wrestled, practised calisthenics in the shabby and dangerous playground, discussed press-up technique in depth and watched their handstand competitions. A group of them stood in a circle and pitched themselves onto their hands over and over again in unison. They practise this throughout the afternoons on their own too, so that next time they might be the last one handstanding. I came across a group of boys digging in the gravel beside the road behind the building, constructing a pathetic gravel castle. I suggested using a bottle to indent circles in a pattern around the mound of dirt, which was met with a murmur of approval.

I spoke for a while with the community leader, a man called Walid, about the sadness of what has happened to Syria, and the trauma of leaving everything behind. When we’d finished talking we walked into the dark corridor and there was a mention of the cockroach problem. Walid turned on his phone light and peered along the cracks between the breeze blocks to show us what was meant. After searching for about five seconds he beckoned us closer to see a huddle of insects, waving their antenna in protest. After that, the experience of looking along the dozens of identical walk ways was quite different. Thousands of metres of living space for the pests, some of whom emerge at night to seek warmth and moisture in babies’ ears.

Indoors, it resembles a number of things. A squat in an abandoned prison, a post-apocalyptic shelter, a hurriedly converted multi story car park. The atmosphere is heavy and damp, and the sparse light bulbs fight a losing battle. It is a very different place to Shatila where the coming and going, engine revs, movie soundtracks, pop music and gun shots clamour all day and last long after sundown. It is necessary to live there for a while to feel the desperate still sadness underneath. In the Saida settlement, one gets the feeling that you could stand in the darkness for hours and hear nothing but footsteps and babies crying. Maybe it feels so different to Shatila because of its relatively rural setting. It is socially isolated if not completely so in geographical terms. It could be its self-containment that makes it feel so prison-like. That, and the longing of its residents to go home.